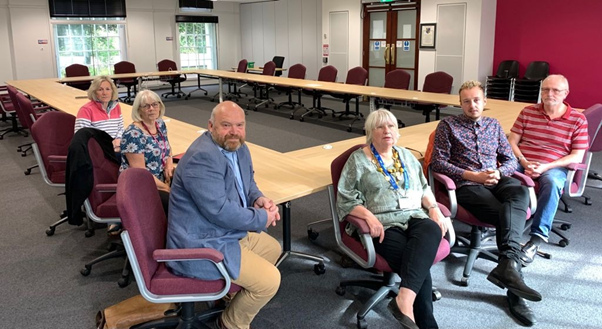 Bill was speaking at his first Shadow Cabinet meeting, held at County Hall today, Wednesday 18th August with Lib Dems from around the County attending in person, and on Zoom.

Bill highlighted the need for the current Conservative leadership at the Council to listen to residents over the coming months as all five Somerset Councils prepare to move to a single Somerset Council.

“Somerset is in a time of great change, facing the impact of Climate and Ecological Emergencies, the crisis in our Health and Social Care systems, the economic consequences of Covid and Brexit, huge inequalities in education and housing, inadequate public transport and poor broadband. Somerset’s Conservatives and their friends in Westminster decided to embark on a mammoth, unwanted and costly reorganisation of the way our Councils work. This was roundly rejected by the people of Somerset in a fair poll, but they’ve ignored the results.”

“Meanwhile, the Conservatives have cancelled their own Cabinet meeting because there is ‘nothing to talk about’! We strongly disagree! Lib Dem Councillors will be talking and listening to our local residents and finding Somerset solutions to Somerset problems. This County needs the Lib Dems to deliver a greener, more caring, fairer and flourishing Somerset - that listens to all its residents”.

Bill was elected to represent North Petherton’s residents on the County Council in 2017. He is also a Sedgemoor District Councillor and a Town Councillor.

In his professional career, Bill worked for nearly twenty years as a secondary school teacher in Somerset. He became a carer for his first wife Karen after she had a brain haemorrhage in 2013. Karen lost her subsequent battle with breast cancer two days before Bill was elected to SCC in 2017. Bill has three grown up children.

In 2020, Bill married Rosie, an Orthoptist who works at Bristol Eye Hospital.