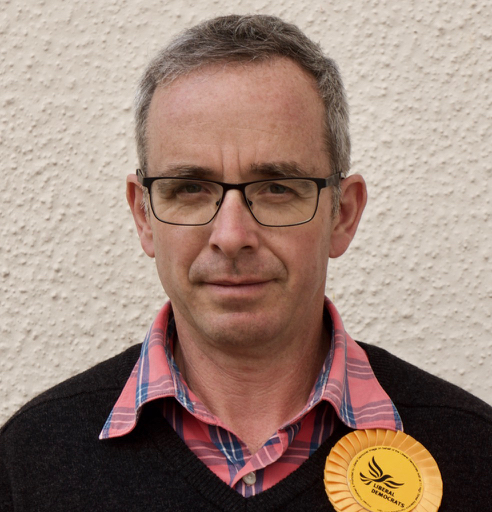 Standing up for Bridgwater and West Somerset

Benet Allen is proud to be selected by the Liberal Democrats to stand for Bridgwater and West Somerset. An enthusiastic and fresh face for the constituency, Benet has lived in the area for the past four years, but was born in Taunton and lived in the West Country since 2010. A real 'high flier', Benet is a coach driver for local company Ridlers – when he isn't flying a helicopter for TV and films! He also has 19 years experience of TV news production in London and the Middle East so he's no stranger to the cameras.

Fixing the mess in Westminster

The planet needs to be put back at the centre of our politics, including reviving the zero carbon homes programme, cancelled by the Conservatives. Nationally LibDems are the only ones who challenge the cosy two-party system stitch-up that we have in the UK. In Parliament LibDems are the only Party which recognises how disastrous it will be for people to lose their rights to travel and trade freely and will give them the final say on any Brexit deal, instead of leaving it all to a few Ministers.

Benet Allen was elected to West Somerset Council in February 2018. Since then, he has striven to serve the people of his patch, Minehead South, campaigning for better buses and restored train services, as well as supporting community initiatives like the Swimming Pool campaign and working with the Cuckoo Meadow Steering Group to help provide youth services for Minehead.

He worked for Reuters Television from 1994 to 2008, moving from video editing to training reporters, making news programmes on a freelance basis for ITN, Channel 4 and BBC News. He also served as IT Consultant for Mirage Enterprises, the late film director Anthony Minghella's production company, before becoming Series Producer for Abu Dhabi Television, where his team made more than 400 episodes of the news magazine show Inside the National. He speaks a smattering of Arabic, although admits it is getting rusty.

Since returning to England in 2010, he has lived in the West Country with his partner Sally, and drives with Ridlers Coaches much of the time. However he also holds a commercial helicopter flying licence and occasionally flies for TV and film-making purposes with Hovercam, a Plymouth-based company. He enjoys long train journeys and has filmed trains in at least 40 countries, only rarely from a helicopter.

He holds a Master of Arts degree from Middlesex University, and a Flight Instructor rating in helicopters.  He is Secretary of both Minehead Rail Link Group and the town's Male Voice Choir.