Ask Bill: Will you pledge to protect the NHS if you win? 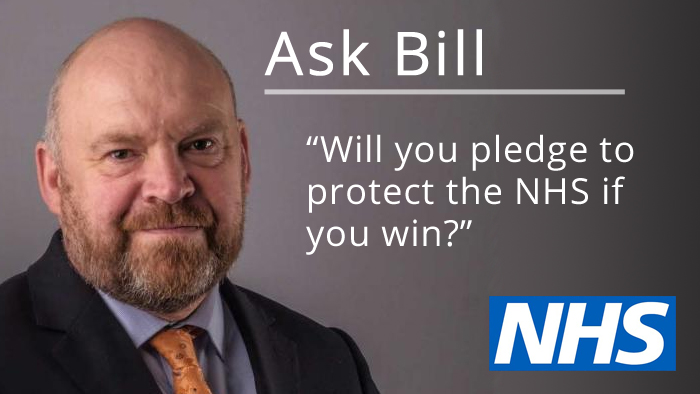 In his travels around the constituency Bill is asked many questions on issues that are important to the local community. Over the next few days we will share some of the most common questions and pressing issues you have been asking about.  Today Bill answers your concerns on the future of the NHS.

In brief my goals are to:

I care passionately about the NHS. My daughter is a Doctor and my son is a Paramedic. The NHS cared for my late wife through her recovery from a brain heamorrhage and her terminal breast cancer.

Our NHS is one of Britain’s proudest achievements. Liberal Democrats share your concerns about the future of the NHS. Healthcare free at the point of delivery was, after all, the idea of a Liberal politician – William Beveridge. Liberal Democrats have fought for, and will always continue to fight for this.
Liberal Democrats were shocked when the Conservatives tried to pass a Brexit law that would have allowed the Conservatives to use the NHS as a bargaining chip in trade deals with Trump. We opposed this in Parliament and stopped it happening and will continue to defend the NHS from trade deals with Trump by stopping Brexit.
Liberal Democrats have also committed, in our manifesto, to support the changes to the Health and Social Care Act recommended by the NHS, with the objective of making the NHS work in a more efficient and joined-up way, and to end the automatic tendering of services. We will repeal Section 75 to end the tendering of thousands of contracts, many of which were won by private firms and which has fragmented NHS care, and oppose further privatisation of the NHS.
Liberal Democrats however are opposed to Labour’s proposal of a damaging reorganisation of the NHS which would cost billions. Money that could instead be spent on mental health services and reducing waiting times. Leading health charities and experts have also criticised Labour’s proposals as being unworkable.
“The Labour party’s intention to repeal the 2012 Health and Social Care Act would risk a damaging and distracting top-down reorganisation of the health service. This would divert NHS leaders’ attention away from improving services and could eat up the political capital needed to deliver other policy ambitions such as social care reform.”
- Richard Murray, Chief Executive of The King’s Fund, responding to Labour’s manifesto, Thursday 21 November 2019.
“While stopping privatisation has become a hot topic in this election, it risks being a distraction from far bigger issues facing the NHS and patients. With waiting lists continuing to grow, the NHS relies on non-NHS providers to deliver patient care and does not have the staff or beds to absorb these services. A major reorganisation is not what the NHS needs and would not be a good use of valuable time and resources.”
- Dr Jennifer Dixon, Chief Executive at the Health Foundation, responding to Labour’s manifesto, Thursday 21 November 2019.
Liberal Democrats will always defend the principle of the NHS being free at the point of use. Liberal Democrats will stop Brexit and use our position in the EU to prevent our NHS being sold-off to Donald Trump in trade deals. And we will end the further privatisation of the NHS and end the automatic tendering of contracts.
We also recognise that almost all the GPs, dentists, pharmacists and opticians who treat NHS patients are private businesses, and that to change this would cost billions of pounds which could instead fund mental health services and reducing waiting times.
Liberal Democrats will strongly back the NHS: we will transform mental health services, invest £7 billion a year in health and social care from a penny on income tax, and help people stay healthy. However, I am afraid that I cannot support this pledge as I cannot support a reorganisation of the NHS that would be damaging and expensive and is against the wishes of NHS leaders, could exclude charities such as the Red Cross, and would fundamentally change the position and role of GPs, a position that has existed since the creation of the NHS in 1948.
Bill Revans