Ask Bill: How will you support our countryside? 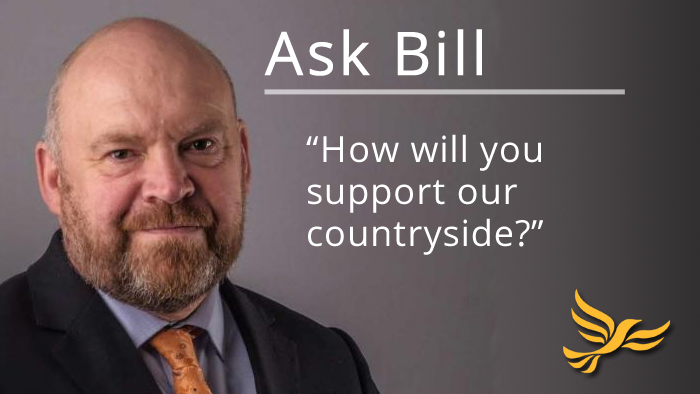 In our ongoing series sharing some of the questions Bill has been receiving from constituents today he shares his plans for addressing concerns about our surrounding countryside and rural life.

1. Delivering full digital connectivity to the countryside by 2025.

Yes. A Liberal Democrat government will increase regional investment in digital and physical infrastructure, as an important economic stimulus. We will invest in the digital economy, with a programme of installing hyperfast fibre-optic broadband across the UK.

2. Mandatory country of origin food labelling to ensure a level playing field for British farmers after we leave the EU.

Of course, the Liberal Democrats actually want to stop Brexit. The best deal for the UK’s goods industries is to remain in the EU. According to the Food and Drink Federation (FDF), 61% of our food and drink exports go to the EU and 70% of such imports come from the EU. The suggested introduction of Country of Origin food labels to attempt a level playing field for farmers in the case of Brexit only reinforces the fact that the Conservative government has got the UK into a massive Brexit mess. However, should Brexit happen then I would support this.

Yes. As government gets ever more centralised our country areas are increasingly left behind.  Successive policing ministers may have forgotten the countryside but It is clear that the criminals have not.  A visible presence from police that understand the needs of rural communities now has to be a priority.

4. Opposing unjustified restrictions on firearms and punitive increases in the cost of licences.

Liberal Democrats agree with the appropriate and proportionate application of restrictions and licence costs. I support shooting playing its important role in supporting the rural economy and environment, but am concerned that the increase in shooting on Exmoor may be having a negative impact on the environment.

5. Making Post Offices the front office of government through the expansion of personal and business banking services, so protecting a vital service to rural communities.

6. Taking an evidence-based approach to wildlife and environmental management, opposing any further restrictions on legitimate rural activities such as hunting, shooting and fishing.

I supported the ban on hunting with dogs brought in in 2005. I will concede that the ban is currently not working in some areas because of various loopholes and I would like to see an independent review of the law and how it is enforced. Police resources are too stretched to deal with it. A review might conclude that  "regulated hunting" (like the middle way proposals) would reduce animal cruelty, which was always my primary aim.