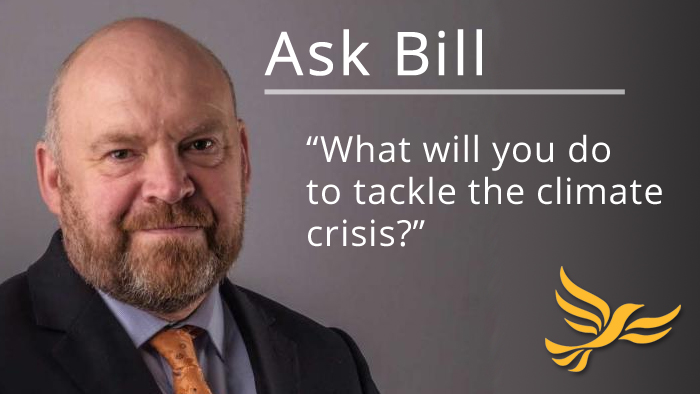 Our planet is on the brink of being irreparably damaged and we are responsible for that damage. The climate emergency is real and our planet is heating to unsustainable levels. Young people have taken to the streets, because they’re so worried that the politicians are failing to act. There is no planet B. We are facing a climate catastrophe which will create huge global inequalities. We have a moral duty to act.

Here in Bridgwater and West Somerset constituency we are already seeing the impact of climate change. Extreme weather events have caused coastal erosion at Blue Anchor and in 2014 serious flooding on the Somerset Levels. The flora and fauna on precious Exmoor are noticeably changing. Bridgwater and its environs would be inundated by the predicted 110cm rise in sea levels. We are truly on the front line of climate change. Since the Liberal Democrats took control of Somerset West and Taunton we have been working hard to develop a climate change strategy for the District.

The Liberal Democrats have a radical, credible and detailed plan to tackle the climate emergency. Liberal Democrats’ plan will halve greenhouse gas emissions by 2030 and achieve net-zero by 2045 at the very latest; and sooner if it all possible. We will work with other parties to:

As a truly local MP for Bridgwater and West Somerset I will speak out on these issues on the local, national and global stages and work with all who share these aims.